Where are all the women in design?

Home » Insights » Diversity and inclusion » Where are all the women in design?

Today, a whopping 12% of Creative Directors are women… wait, is that it?!

While 70% of creative students are female, a Design Council survey showed that women only make up 40% of the professional design workforce. So where are they all going after their studies?

Grace has 5 years’ experience in the design industry, working both as a freelancer and in agencies.

“All of the places I’ve worked previously have been fairly balanced with male and female designers in all positions; Synergy is the first place I’ve worked that has been far more male dominant, which is why we wanted to do this blog post.”

Throughout Jen’s career, she has always worked in male-dominated studios.

“When I started my previous job, I was the only female designer out of 8 creatives – over time they made the effort to employ more females to create balance.”

“After more than 10 years in the design industry I recently took time out from my career to start a family. Combining work and childcare with a shift in priorities has been hard at times, but I do think since becoming a mum I have grown as a person and gained new perspectives – which gives me a more diverse creative outlook”.

The lack of diversity in design agencies is a hot topic at the moment. A mixed workforce is good for business and McKinsey have reported that gender-diverse companies are 15% more likely to earn above-average revenue. This couldn’t be more true for creative agencies, where diversity of thought is fundamental for generating fresh ideas. The more variety in your design team, the bigger your pool of ideas – and the better your work.

“Different people working together on a project can require putting in extra time to achieve the kind of shorthand understanding that comes quickly with people from similar backgrounds,” says Hana Tanimura, leader of Google’s Creative Lab. “But from my experience, it’s precisely that light ‘friction’ that enables new kinds of thinking and new ideas to flourish.”

A variety of factors come into play with this issue:

We asked 3 female creatives, who have had very different experiences, to give their take on what’s causing women to opt-out of careers in the creative industry. 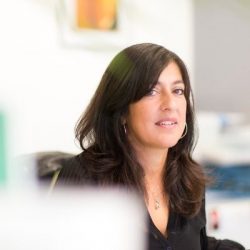 With over 30 years of graphic design experience under her belt, Suffia has spent time both here and in the US working with a variety of different teams. And despite being the first (and only) female designer at the London agency where she started her career in 1989, Suffia only picked up on one big difference between herself and her male colleagues.

“The only marked difference I remember was the male ego and competitiveness. When male designers faced criticism or pressure, they generally shouted or argued – whereas I’d hide away and cry. But that might just be a Suffia trait rather than a female one!”

Emotional outbursts aside, Suffia found the whole experience to be very fair: “I never felt any discrimination and was treated exactly the same as male designers at the same level, given equal projects and the same pressures… I also believe most women see success differently to men. Family can’t be ignored; women who have children often take time out in the early years to nurture and look after a family.”

As a mother herself, Suffia doesn’t see family life as a challenge to her career, but rather something which enhances it: “The pause in my career was the right thing for me. It made me a better, more rounded person, and so a better designer.” 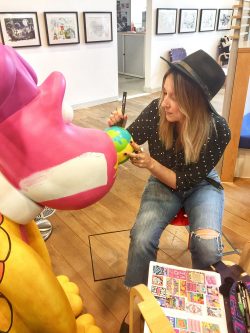 Sarah got her foot in the door at Aardman through work experience 10 years ago and has since freelanced across various areas of the company, until finding her place as Senior Designer in the Interactive Department.

“We’ve had a mix of male and female designers here throughout the years, ranging from graphic designers, to animators and illustrators, so hopefully that gives people a little faith that some companies aren’t interested in your gender when it comes to a job role.”

Sarah believes that although the design industry was male dominant in the past things are changing: “It surprises me, to be honest. I know SO many incredibly creative women, all doing well in their fields, I hadn’t considered the design industry to be any different. I think graphic design used to feel like quite a male-orientated subject, and I wonder if the leading roles are often given to more experienced designers, who may be male, but I definitely believe things are changing.” 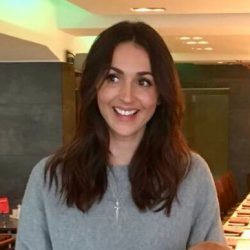 After graduating from University, Laura worked at a range of design agencies. After 4 years at Dyson, Laura wanted to focus on UX and UI, so made the move to Modular Digital here in Bristol, where she has had more opportunity to mix with women in leadership roles.

“It’s been a real eye-opener, as leaders at Dyson were predominantly male. Although I’ve definitely noticed a lack of women in leading roles, I have encountered a lot of women at other levels in the design industry. Our co-working space hosts a Women’s Tech Hub every week, which is amazing for networking and meeting women in similar roles to my own.”

In Laura’s opinion, the challenges women face start right at the beginning of their employee journey, during recruitment, and continue throughout their career.

“I feel at some interviews, I’ve been asked specific questions that wouldn’t have been put to a man. And, until recently, I’ve worked in teams where women have been given a different level of respect to male colleagues. Even senior attitudes have been different, and not in a positive way, towards female staff.”

But perhaps the most damning reason behind the lack of women is around issues with equal pay, which has been a very real challenge for Laura: “I’ve definitely been in positions where I’ve been earning less than my male colleagues in equivalent roles.”

According to the Office of National Statistics, women are paid 5.6% less than men and there isn’t a single industry where women are paid the same as men, with the design industry in the top five worst industries for the gender pay gap.

Here at Synergy, although our senior management team is made up of more women than men, and our client services team is predominantly female, this isn’t the case in the design team. Only 18% of the team are female, with all leading design roles filled by men. So, what do the male designers have to say about all this? We chatted with them to get their views on the lack of women in design.

Giles Hicks, Executive Creative Director: “If I look at roles we have advertised recently and the actual applications received, the Creative Director role was approximately a 25% female-75% male split, whereas the applicants for the copywriter position were 50/50. I would love to see a more diverse mix apply for roles.”

Creative Director, Olly Whitman agreed: “It’s surprising how few female applicants we do see but there are loads for junior/grad roles with fewer progressing to seniority. I think women often opt for the flexibility of freelance life. It’s not just a gender balance issue, there’s a definite white, middle class bias in the industry, so attracting any diversity needs to be looked at.”

So what can be done?

Making small tweaks to a job ad could make a huge difference to who applies. Subtle changes in the way a role is worded, presented or even where the ad is placed could attract and encourage a more diverse selection of applicants.

Offering benefits like flexitime or jobshare can help to attract women to senior roles. Women shouldn’t be at a disadvantage for having children and a more fluid approach to senior positions, whether it be flexible hours or being able to work from home, could help women to progress and have the same opportunities as their male couterparts. Flexible working has shown to improve work-life balance and even people’s health so it’s a no-brainer to offer it as part of a role.

With so few females in senior roles there is a lack of inspiration for young designers. Women should be visible at the forefront, instilling confidence in young women. An example of this is the Twitter hashtag #VisibleWomen, which celebrates the different talents of all women and encourages people to recognise the strengths and skills women can bring to the workplace.

We believe that everyone, of all genders, should play a role in raising women up and tackling inequality and that this should be a focus everyday of the year, not just on March 8th.

Perhaps a shift in mindset across the industry could help:

8th March is International Women’s Day (IWD), and this year’s theme is break the bias.…

Is employee activism the answer to delivering your corporate climate promises?

There’s a spotlight on D, E and I like never before and while the importance…