Cheltenham Design Festival: how the role of a designer has changed

Home » Insights » Culture » Cheltenham Design Festival: how the role of a designer has changed

We recently went along to the Cheltenham Design Festival to soak up the day and learn more about the changing face of design.

One of Synergy’s Designers, Grace, went along and got thinking about how the role of a designer is evolving in an ever-changing world…

Where once design was thought of simply as how things look visually, it’s shifting in recent years towards a focus on critical thinking and creativity – how things can be improved, changed and adapted to suit people’s needs.

A designer’s job is to make sure that the design goes unnoticed; to make something so well-designed that it becomes easy. We have the responsibility of being good communicators, delivering messages and solving problems.

Increasingly, design is less about traditional design techniques and approaches. It’s a powerful time to work in design; the world around us is changing at a rapid pace and we have the chance to create real and lasting impact. It’s proven that having designers at higher levels in business increases profits:

‘For every £1 invested in design, businesses can expect over £4 increase in net operating profit and almost half (47%) of the UK’s rapidly growing businesses see design as crucial to business success.’ 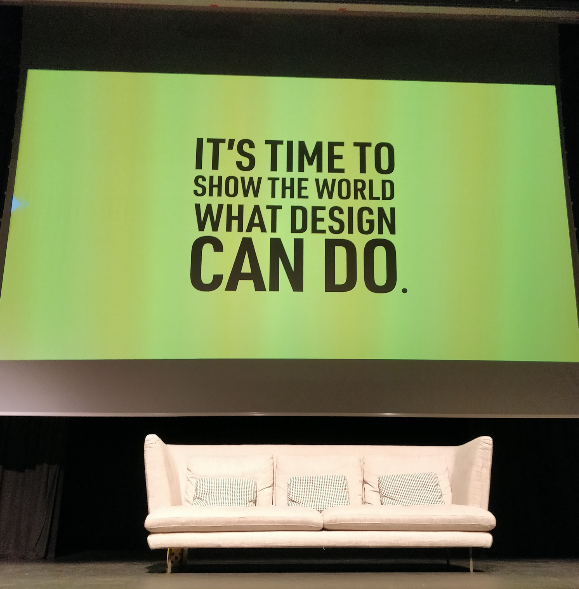 Creativity is not a linear path

When it comes to creative design work, designers are the conductors bringing all of the elements together. Working with various people along the way, designers are responsible for the appearance of a piece of work, the bit that truly grabs the consumer’s attention and draws them in. With the weight of the design on our shoulders, our job is to make sure the right questions are being asked and to ensure things are challenged to reach the very best end result. Everyone has an opinion on design, however this doesn’t make everyone a designer.

All of the designers at the Cheltenham Design Festival – architects, fashion designers, graphic designers and more – were all notably passionate about their own discipline, and they all had one thing in common – people. People’s buying habits, how people use spaces and buildings, how to make processes easier for people and how to influence people’s behaviours to create genuine change.

Some standout examples from the festival

Patrick Grant, a fashion designer who is also known as a judge on The Great British Sewing Bee, was extremely passionate about the damaging effect of fast fashion on the environment. He spoke animatedly about how society is caught up in social media, wanting the latest thing and wanting it now.

He spoke about the diminishing quality of cheap clothing and the dangerous conditions in which they’re made, putting workers at risk and ultimately contributing to environmental issues. The fashion industry is the 4th biggest polluter – cheap garments are often made from plastic, which will never decompose, instead sitting in landfills, and polluting our sea and air when microfibres are incinerated.

A lack of clothing made in the UK, the cost of materials, the cost of labour and transporting the products are all contributing to this issue. To help combat this, Patrick has set up his own textile factory in Blackburn called Community Clothing – bringing back employment to the North of England, where the textiles industries used to be booming, employing local people to make high quality products and pay them fairly, restoring the pride into Britain’s textile communities. 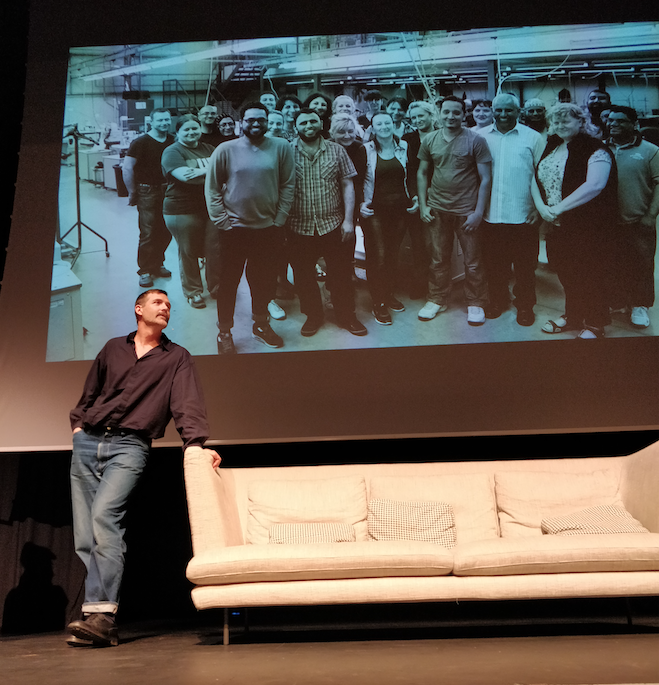 Alexander Taylor is an industrial designer who has worked with Adidas and Parley, an organisation which encourages creators, thinkers and leaders to come together to raise awareness for threats to our oceans, the most important ecosystem of our planet, and collaborate on projects to end destruction. He designed a shoe made entirely from yarns and filaments produced using plastic and fish nets which have been dumped in the ocean. The key message Alexander was trying to convey was for people to reuse and repurpose waste found in our oceans. Not only does this jump-start a new way of creative thinking using what we already have and not creating new things, it also helps the environment and makes design more ethical and climate-friendly.

Andy Puncher is the founding director at the architecture firm, pH+. He is usually tasked with fitting the most amount of housing into a space, including outdoor public space. He talked about a number of projects where the pH+ team went above and beyond what was asked of them, managing to fit in more homes than originally asked. His designs focus around people and how they interact with spaces.

Andy spoke about Trego Road in Hackney, a project which draws on the concept of shared space where residential and public spaces meet. The scheme seeks to create shared crossover spaces for communities to meet and form, blurring the boundaries and creating collaboration between different communities. The project also touched on communal internal space – creating workshop spaces and commercial units. Andy’s job is to take into account the behaviours of people and how they use spaces. The thinking behind his projects is pretty impressive.

The talks at Cheltenham Design Festival were really inspiring and a great insight into the world of design. The thing it really highlighted for me is that as a designer, it’s so important to consider the consumer/end-user and how they are always changing. The impact of social media and new ways of working that people are developing need to feed into design styles. Ultimately, it’s people that always need to remain at the centre of design; designers need to continue learning about the way people think and react in order to create work that is fit for purpose. In constantly shifting times, we have much more complex lives and design needs to mould to this.

If you also went to the festival and fancy a chat about what you learnt, I’d love to hear from you, get in touch.

The REAL value of your Employer Value Proposition (EVP)

When Employer Value Propositions (EVPs) first gained popularity, they were often simply seen as a…